Those who say themed weddings are tacky don’t know what fun they’re missing. Cindy and Matthew were married in an amazing Harry Potter themed wedding that is the enviable fantasy of every avid Harry Potter fan, bringing new meaning to the term ‘magical day.’ 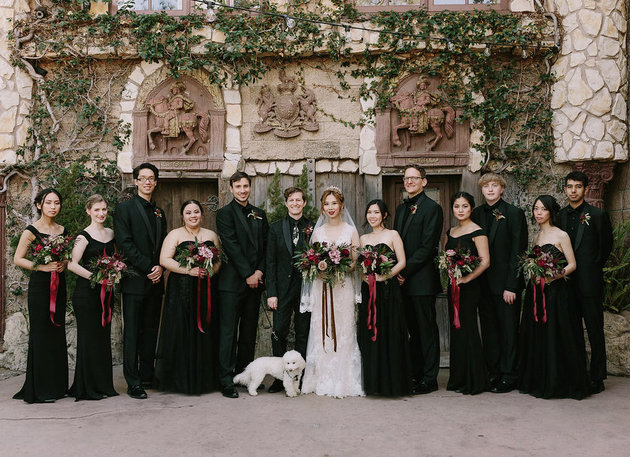 The couple were married in February last year. The Bride told Martha Stewart Weddings that she wanted her big day based on the “dark moody nature of the films,” despite having a groom who had never before read any of the books.

Not quite willing to make the arduous trip all the way to Oxford the couple chose Hollywood Castle in The Hills to serve as their Hogwarts inspired venue. With its rustic exterior and overgrown botanical, the venue set above The Hills of Los Angeles is designed to emulate the feel of a British castle. “It was one of the few locations we found that captured the magical feeling of Hogwarts,” said Cindy.

“Formal wizard dress code” are probably not words one often reads on a wedding invitation, but Cindy and Matthew’s guests fully embraced the couples theme, donning their finest wizard wear. Some guest took greater creative liberty such as the couple’s friends featured below, dressed in wigs and fur capes to resemble wolf animaguses. 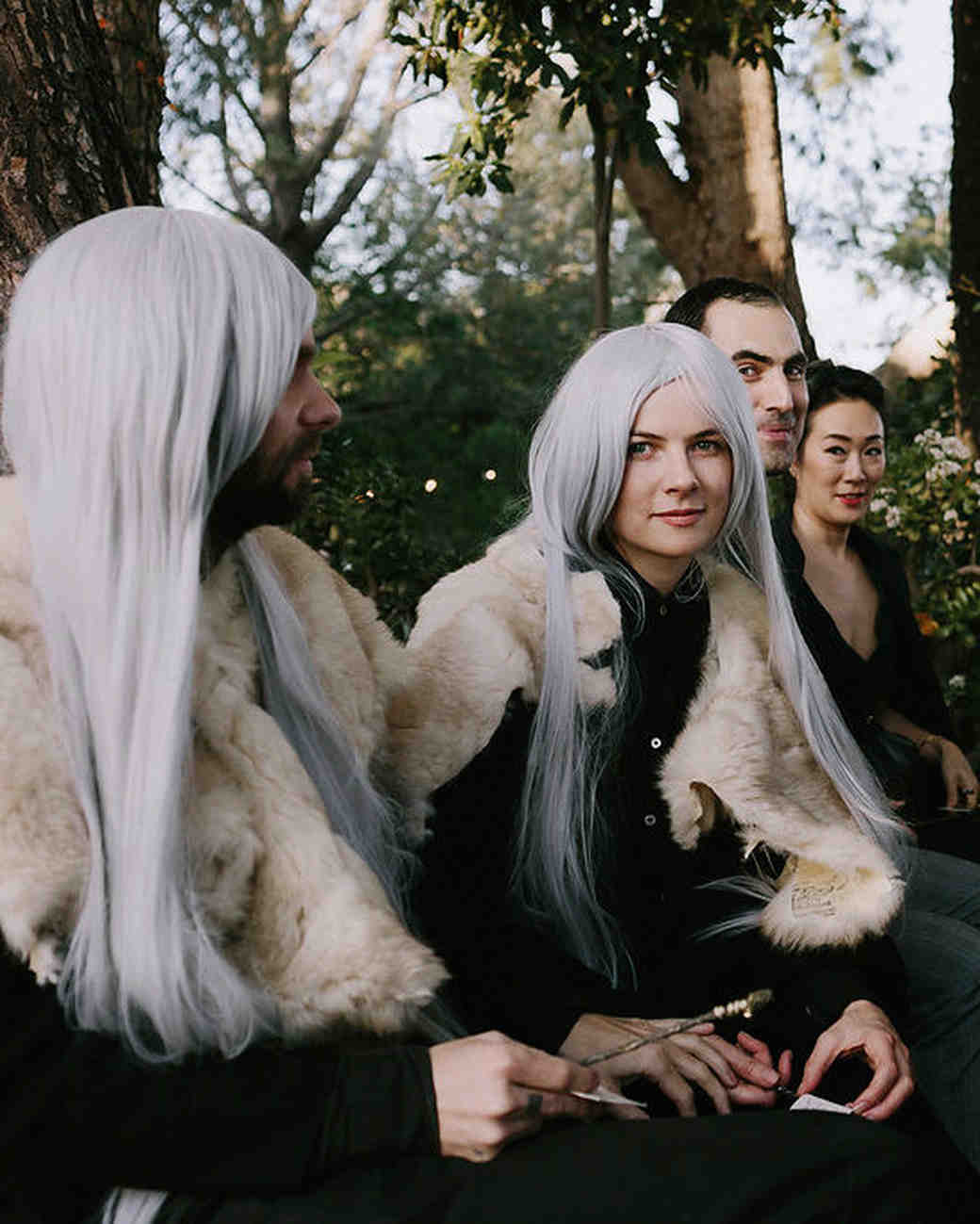 The Bride, a calligrapher and interface designer made and designed many of the Harry Potter touches for her magical day. The ‘save the date’ was designed to resemble a Hogwarts acceptance letter and included a magnetic ticket to Platform 9¾. Guests also received a Marauder’s Map for the invitation, and of course no self respecting wizard can get by without a wand. The bride crafted wands for guests complete with an Ollivander inspired tag reading, “Cast a spell of love and joy throughout the night.”

The reception space was naturally reminiscent of the great halls of Hogwarts. The long feasting tables were styled with towering candelabras, red garden roses and lush untamed greenery. 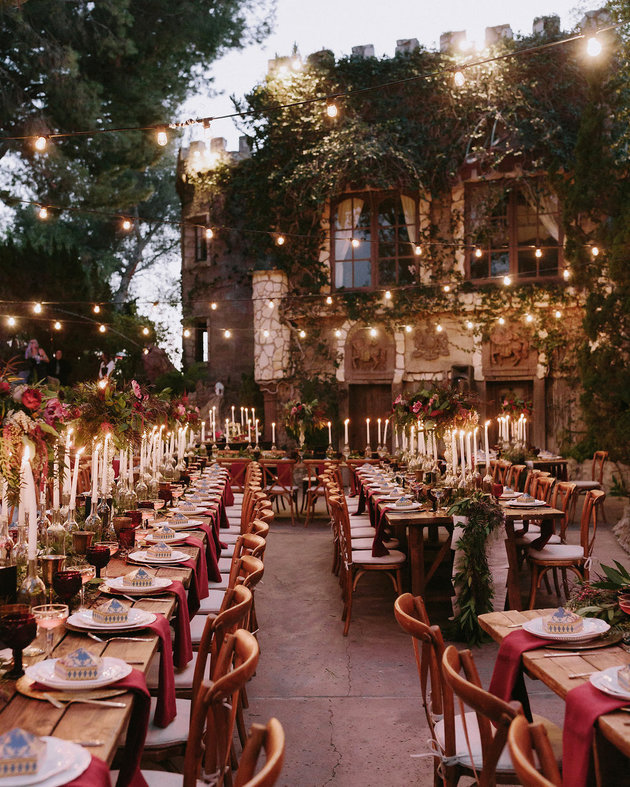 Cindy and Matthew also delighted their guests with an assortment of themed treats including potion parfaits, chocolate wands and lightning bolt shaped cookies. 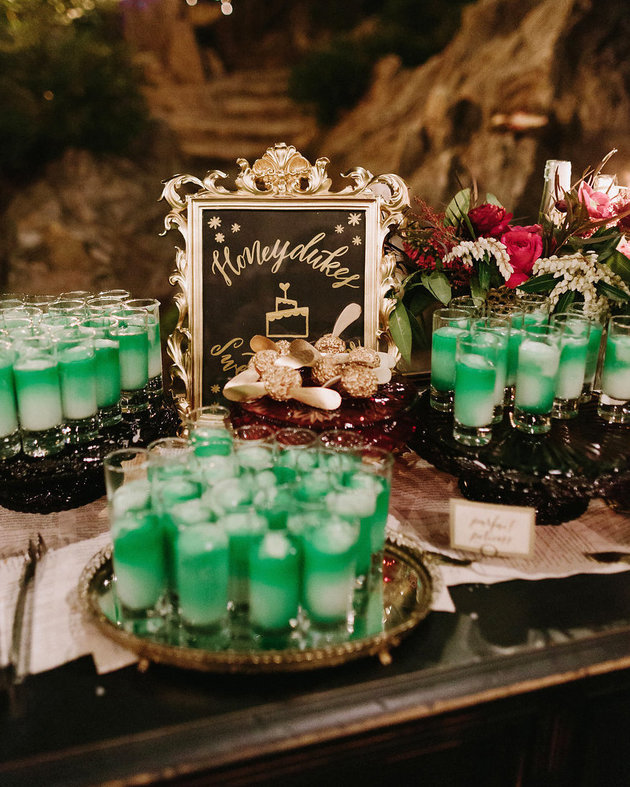 Of course no Harry Potter themed wedding would be complete without the iconic floating candles. This served as the pièce de résistance of the night and the centerpiece to Cindy and Matt’s first dance. REAL WEDDING: This Wedding is All Glam with a Touch of Geek

15 Fun Food Station Ideas that Will Wet Your Appetite