The Best Engagement Ring According to Your Star Sign

Need help choosing an engagement ring? Perhaps the answer is in the stars.

According to horoscope and tarot reader Mystic Medusa, looking to your star sign for guidance is a century-old concept that notes each sign of the Zodiac is linked to certain herbs, scents, colours, flowers, and of course, gemstones.

“Everything in the universe is not only linked, but in complex relation to one another. Gemstones are also symbolic ‘earth,’ so wearing the right one for you helps keep you grounded and serene, no matter what is going on around you,” she says.

So, when it comes to finding your perfect engagement ring according to your star sign, Mystic Medusa suggests turning to these classic, and time-honoured interpretations for guidance, which she believes are more potent.

This is the primal sign of the Zodiac, Mars ruled, fierce, and Alpha by nature. The Aries bride’s most supportive talisman gem is the bloodstone or ruby.  The bloodstone is associated with strength and courage. Ruby is, of course, one of the four officially precious rocks – always aligned with people who wield personal power.

Taurus is ruled by the Love Goddess, Venus and is an Earth sign. So, naturally the Taurus bride is assigned one of the most magnificent gems of all: Emerald. It’s a personal favourite of the Ancient Egyptian Queen, Cleopatra, and a symbol of deathless love. Alternatively, think green tourmaline, beloved by modern shamans for its ability to open the heart chakra. Though not an actual gemstone, Gemini has long been associated with the pearl. It’s such a strong link that some say it is even unlucky for any sign but Gemini to wear pearls! They symbolise worldly wisdom and eloquence, along with enduring and prosperous alliances. If nothing but a gem will do, consider blue aventurine or blue agate.

For moon ruled Cancerians, the talisman rock is obvious: the mystical moonstone. It’s long said to be associated with star-crossed lovers and heightened psychic powers. In Ancient Rome, this beautiful silvery gem was linked to the Moon Goddess Diana.

Behind its facade of glamour, diamond is the toughest rock of all and known since the olden days as the “stone of invincibility.” It was coveted by powerful women as much for its resilience as for its icy beauty. What better talisman for the Leo bride, Queen of all she surveys, and a long-time fan of strength concealed by a glam aura. 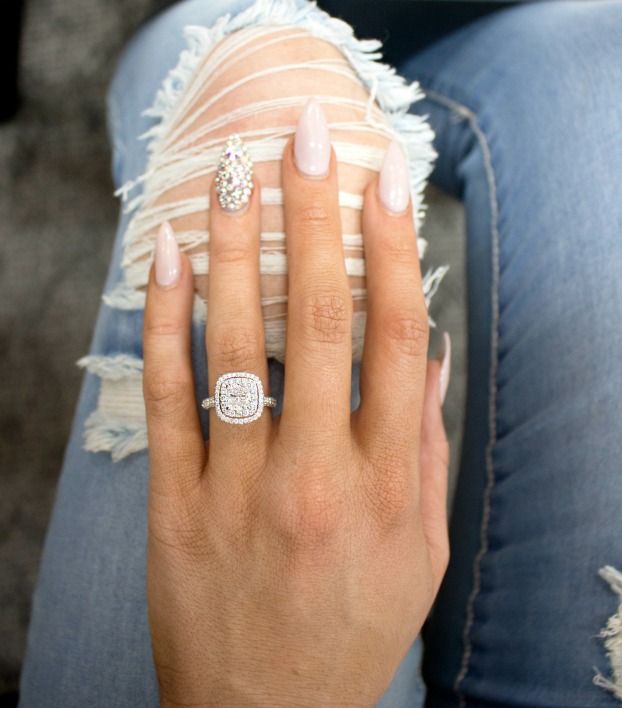 Amber is prized, sublimely beautiful, and supportive of Virgo vibe despite not technically being a gemstone. Virgo is the most chic and articulate sign of all, ruled by Mercury, the God of Wit. If nothing but a rock will do, yellow sapphire is the ultimate. Virgos benefit from the warmth and golden aura of anything thus coloured.

Like Taurus, Libra is ruled by Aphrodite-Venus, but she is an Air Sign, not Earth. Her talisman rock is the stunning, incandescent opal – said to be named after the Ancient Roman Goddess Ops, wife of Saturn. It symbolises a significant and enduring alliance, a woman who wields influence in every domain and strong dynasties. Black is the colour of Pluto-ruled Scorpio, and this is not the black of mourning nor anything subversive. Think black agate, black diamond, black sapphire – jet black gleaming strength, the black of a mysterious raven and deep luscious night-time dialogue. If black is too goth, think any stone indigo. Depths don’t frighten Scorpio.

It may not seem very bridal, but turquoise – the most magical stone of all according to many indigenous cultures – is the gem for Sagittarius.  Known as the “stone of the sky,” it was beloved to the ancient princesses of the Incas and Celts alike. It is said to help the wearer to always speak and/or to know the truth. And it’s stunning with a tan!

Ruled by Saturn, the God of Time, the most potent token of protection for Capricorn is a metal, platinum. This is because they are said to have such strong innate Earth energy that a precious metal is required to counteract it. But if it is a rock that is desired, consider citrine – the stone of prosperity and the happy household. Aquarius is drawn to the unconventional or non-expected style statement and so whatever gem is chosen, it will have to be set in a unique fashion. Since time began, this most cerebral of signs has been associated with the deeply spiritual lapis lazuli – said to aid the higher mind and relationships with a potent self-development dimension. Think also amethyst or even the more indigo of the sapphire family.

Ruled by Neptune, the planet of Shamanic Glam and visionary soul mate relationships, the Piscean ideals are high. The Piscean bride’s most appropriate gem is the aquamarine, once prized as the “treasure of mermaids” and linked to ageless beauty and content. As Pisceans are also extremely sensitive to energy, consider also an element of protective rose quartz. How Much Should You Really Spend on an Engagement Ring