Prince Harry and Meghan Markle have finally made their first public appearance as a couple together! The pair were spotted hand-in-hand at an Invictus Games semi-final tennis match, with the duo taking time out to greet and chat to fans in the crowd (could they be any more perfect?!). The couple sat court-side together and spent most of the game smiling, laughing, and just being adorable, not to mention cheering on athletes from Australia and New Zealand. Their appearance is the strongest sign so far that an engagement is on the cards, with Ladbrokes bookies suspending betting on an engagement announcement. Earlier this week. Meghan attended the opening ceremony of the Invictus Games in Toronto, with the Suits star was seated in the stands alongside Soho House director Markus Anderson. Meanwhile, Harry was seated a few rows away with first lady Melania Trump, after taking the stage to launch the games. There had been much speculation that the event would be the first time we would see the two together at a public event and although they may not have had adjoining seats, being in attendance at an official event is very much a big deal. It’s the first time we’ve gotten a glimpse of the two since they began dating in May 2016. 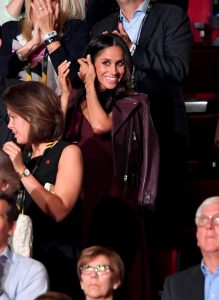 It was Harry’s first visit to Canada to launch the Invictus games that he first met the actress while she was filming her series suits, so it’s super romantic that they both were there together. Earlier this month, Meghan opened up about their relationship in an interview with Vanity Fair. “We’re two people who are really happy and in love”. The two have since attended a few low-key events, so could appearing at such an official event be the next step towards a royal engagement? We definitely hope so! Created by Prince Harry the Invictus games celebrates the lives of brave servicemen and women that have some form of physical or mental injury from their services. Athletes from 17 countries compete in 12 sports over an eight-day period. In launching the Games, Harry told the audience he wanted to use his platform to inspire the world “By the spirit of those who wear the uniform”.

Sophie Monk has married the winner of The Bachelorette?!

All the Red Carpet Glamour from the Brownlow Medal