Can you Say No to your S.O’s Sibling being your Bridesmaid? What’s the best way to pick your bridesmaids? It’s a question brides have been asking themselves since the beginning of time, but throw in some family drama and the issue only becomes more complicated.

One bride-to-be has found this out the hard way. In a recent Reddit thread, a bride has posted with a cry for help, writing that her fiancé is trying to force her to include his sister in her bridal party. “I have met her a whole two times, she’s nice, but I want to have people who I love and are friends with around me. She’s truly wonderful, but her personality type is just really antagonistic with mine and I know it would just be a bad day,” she writes. Ouch. While it’s always lovely to include siblings in the bridal party, is it necessary? Of course, you’re not required to include them, but leaving them out can be messy. The problem tends to arise when siblings have the expectation that they will be included, and there’s often a lot of pressure from other family members to make this a reality. But when you don’t have a great relationship with your sister (or your sister-in-law to be!) spending your entire wedding day with them is a lot to ask.

The tricky thing about siblings is that they’re a lot harder to avoid than friends. After all, you still have to see them at family dinners! But in this case you’d think it’d be easy to find a compromise, right? (After all, marriage is all about compromising!) The bride initially thought so, too. 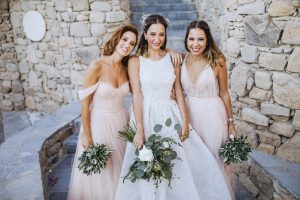 “I suggested she could read something, or be on HIS side, but neither of these were “compromises”,” the bride said. “His idea of a compromise is all or nothing seemingly, and the last time we disagreed on this he was upset for days. He says he wants to make sure that she’s happy.” Never mind the fact that the groom should maybe be more focused on making his fiancé happy than on making his sister happy in the lead up to saying “I Do”, we think the bride’s ideas of how to include the sister are pretty great. If only the groom agreed!

If you ask us, there’s nothing wrong with a mixed-gender bridal party. After all, some traditions are made to be broken. What do you think?

Extravagant Armenian Wedding Kim K would be Proud Of

Brother Sobs Watching his Sister’s Wedding Dance with their Dad