All the Gossip from Last Night’s Bachelorette Premiere If last night’s episode is anything to go by this season of The Bachelorette is going to be a wild ride. A contestant threw his underwear, there was a Zoolander-esque catwalk walk-off, an almost nudie run and an unexpected intruder in the pool. There was laughter, some tears and a world first double delight rose. And somewhere in between all that fun, Bachelorette Sophie Monk met her 18 suitors for the very first time.

For those who missed the episode, here is a run through all the juicy goss from last night’s Bachelorette premiere. 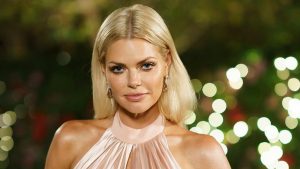 The episode began with Sophie explaining she wants a relationship like her parents who have been happily married for 43 years. Having been unlucky in love and putting her career first, she’s now ready to find someone she can spend the rest of her life with.

“I’m ready to fall in love. I’ve been searching for this my whole life. This guy has to exist”, she said as the first man arrived to meet her. “It feels like a fairy tale. I feel like Cinderella. I’m gonna meet my prince”. The first contestant is totally magically. His name is Apollo, he’s sweet and sincere and he impresses Sophie with some magic tricks. The other contestants seem to fall in love with him too! Next is Jarrod, a 31-year-old vineyard manager from Victoria and he brought along a tub of grapes so Sophie could help him crush them. Kind of ew? Along comes, Eden with a boom-box dressed in an old hip-hop outfit and he starts breakdancing. Problem is he can’t really dance. But Sophie was sure entertained. Then came James, who was so taken back by the blond bombshell that he awkwardly cut off the conversation and got lost on his way to the cocktail party, *bless what a cutie. But the cutest entrance by far is three adorable boys suited up. They ask Sophie to date their uncle and so their uncle enters and it’s ‘man bun’ Sam. He and Sophie seem to get along, despite her dislike of his hair. 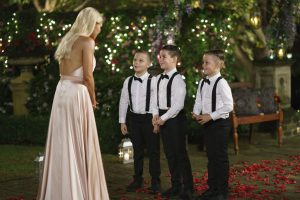 And so a slew of other suitors enter the scene and they all start sussing each other out. A few private chats with Sophie and then she decides it’s time to play “Never Have I Ever”. The game brings up some interesting facts and some tears from suitor Jourdan – yes it’s all very dramatic! But the drama gets taken up a notch with the boys deciding it’s time for a walk-off Man Buns vs. Clean Cuts. The walk-off ends with Hayden (the guy who threw a ‘dab’) managing to take off his undies throwing them in Sophie’s face, a few blue steels and Sam running around pantless which eventuates in a dip in the pool. But it’s this mad display that seems to impress the Bachelorette and she gives Sam the double rose, which means he’ll get two one-on-one dates with her. Oh, and did we mention there was a possum aka an intruder in the pool? Perhaps he too was trying to impress Sophie with his skills.

The episode ends with the rose ceremony in which 18 suitors become 15 and Chad and Jamie are the unlucky ones. We can’t wait to see what happens next!

An Enchanting Scottish Affair - Real Wedding of Emma and Lachlan