If you were too blinded by excitement – or too busy assuming your role as Fashion Police – to really pay attention to the little details of Prince Harry and Meghan Markle’s wedding, never fear – we have all the bits and pieces you may have missed.

1. Rev. Michael Bruce Curry Reading His Sermon Off An Ipad

If you needed a reminder that we’re truly in 2018, the highly animated (and highly entertaining) Most Rev. Michael Bruce Curry read his sermon off an iPad and people worldwide were loving it. Maybe one of the best parts of watching the wedding was keeping an eye on the wedding guests (we were looking out for Chelsy Davy) and it looked as though quite a few people were ready to doze off during the ceremony. Unless they had flown overseas for the nuptials, we don’t think many of them had a good excuse.

We see you, Princess in the pink hat. And you, Prince Andrew. 3. Harry Broke Tradition And Turned To Look At Meghan

As Meghan made her way down the aisle, Harry turned and watched as she approached (something which William did not do when she married Kate in 2011). According to Good Housekeeping, this is against British tradition as the groom cannot look at the bride until she has reached the altar. 4. Harry and Meghan Playing With Each Other’s Hands

It’s fair to say our hearts were aflutter the entire wedding, but when the camera focused on Harry staring adoringly at Meghan and then the two playing with each other’s hands while the priest read his sermon, we may have squealed and/or fainted.

Look at their hands?

5. Harry’s Loving Words To Meghan When She Arrived

Do we really need to say anything more?

This is so magical ?? #perfect#couple#perfectcouple#wedding#royalwedding#princeharry#england#british#meghanmarkle#bride#groom#fashion#givenchy#ootd#ootn#windsorcastle#gorgeous#pretty

6. Prince George Tiredly Leaning On His Dad As The Procession Began

The little prince looked exhausted by the end of the wedding ceremony and hid behind his father, Prince William, as Harry and Meghan left for their procession.

We can only imagine that Prince William is saying, “it wasn’t too long ago that this was us and now we have three amazing children” ? #weddedwonderland #royalwedding #katemiddleton #princewilliam #princesscharlote #princegeorge

7. Princess Charlotte Playing It Up For The Cameras

The little princess is known to have a bit of fun when it comes to public events, so it’s no surprise that she enjoyed poking her tongue out at the paps – much like her uncle when he was a boy. As it turns out, Oprah’s beautiful pastel choice almost didn’t happen! Stella McCartney and team worked tirelessly overnight to get the dress to Oprah after she realised her initial choice would photograph as white on camera.

9. The Horse That Wanted To Run Away

Even a royal wedding has its mishaps. A white horse in front of Harry and Meghan’s carriage looked as though it had its own plans, going off course and almost injuring a police officer.

The song was also sung at Diana’s Funeral in 1997. The internet seemed to be keeping close tabs on Harry’s exes, Chelsy Davy and Cressida Bonas, who both scored invites to the wedding. However, most people were looking at Chelsy – Harry’s on-and-off girlfriend of 6 years – and the apparent side eye she was serving.

When you watch your ex get married… ? #RoyalWedding #chelsydavy pic.twitter.com/9Z4S0w8NkX

While the Duchess of York was left off of William and Kate’s invite list, she was there for Harry and Meghan’s wedding, though she was seated next to the choir and far away from her ex-husband and daughters. If you were following along, Kensington Palace released The Order of Service for the wedding but forgot to fix one detail – the fact that Thomas Markle was no longer walking his daughter down the aisle.

14. The Priest Used Meghan’s Real Name Only Once

Meghan’s first name is actually Rachel (just like her character on Suits), however The Honourable Justin Welby, Archbishop of Canterbury, only used her real name (as well as Henry for Harry) once, saying, “we have come together to witness the marriage of Henry Charles Albert David and Rachel Meghan, to pray for God’s blessing on them.”

After that, it was an informal “Harry and Meghan” only.

Doria Raglan was clearly alone for the big day, however Prince Charles was a gentleman and stayed beside her, even walking her out of the church and talking to her often. While we’re more than happy to repeat an outfit, it’s apparently a fashion faux pas when it comes to anyone in the limelight. If you were wondering why Kate’s immaculate outfit looked familiar, she actually wore it to Princess Charlotte’s christening in 2015 and the Queen’s Birthday in 2016. 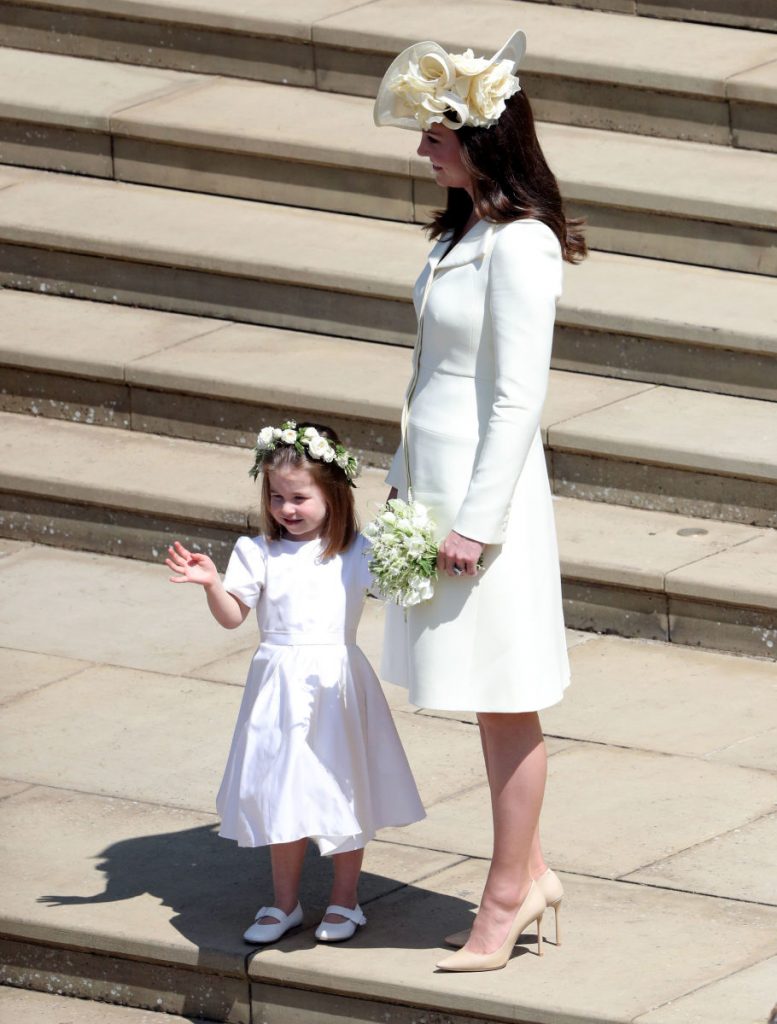 17. A Second Kiss For The Cameras

While we didn’t get the iconic Buckingham Palace balcony kiss, Harry and Meghan did manage to sneak in another peck as they made their procession. 18. Meghan Had Another Piece Of Diana With Her

As the couple left for their reception, it was hard to miss the large aquamarine ring that Meghan was rocking – one that belonged to Diana. Riding off in style, we wouldn’t be surprised if you were distracted by the stunning 1968 Jaguar to realise that the number plate was the date of the wedding. 16 Things Meghan Markle Can't Do Now That She's A Royal