We’ve got Grammy fever at the moment and with all the amazing stars on the red carpet today, we almost don’t know where to look! So while our favourite musicians are raking in their awards, we’ve decided to take a look back at the most iconic Grammy looks of all time (excuse our Kanye moment).

While some award shows, like the Oscars, are renowned for fancier frocks, the Grammys never fail to produce some of the most outrageous and memorable fashion moments in history.

From the fashion faux pas of the early 2000s, to the more outlandish looks of the mid 2010s the Grammys have always been a stage for musicians and presenters to truly make a statement.

So, take a trip down the Grammys memory lane with us – we promise it’s a wild ride.

This list wouldn’t be complete without mentioning the King of Pop. This gorgeous bedazzled jacket showcased just how fashion-forward Michael Jackson really was, with this outfit remaining one of his most iconic. Probably the most iconic J Lo look of all time. This Grammys look needs no explanation – it is the Grammys. This risky, semi-nude look gained a lot criticism, with the outrageous slits in this dress turning heads! Thankfully there were no wardrobe malfunctions for Toni Braxton that night! Matching outfits – we don’t see it as often as we did in the early ’00s and we’re torn about whether that’s a good or bad thing. Amazing. Different. Hilarious. OutKast shines in this look as they showcase their kooky nature, differentiating themselves from the crowd. What’s cooler than being cool? ICE COLD. 2002 was a simpler time. A time where you could rock leather on leather and a motorbike helmet on the red carpet. Lil’ Kim took a massive fashion risk when rocking this outfit, receiving mixed reviews. It now goes down in history as one of the most bizarre red carpet moments. This golden look really highlights what the early 2000’s was about. The extra draping and matching jewellery really brings out 2004 in this look. Regardless, Beyoncé looked gorgeous as she showcased her beautiful curves. Channelling Prince’s Purple Rain, Kanye’s iconic purple suit and white gloves set him aside from the mundane in 2006, highlighting his fashion forward nature. Of course, original Gaga is on this list! While she has had some pretty outrageous looks, we think that this 2010 outfit really shows the true Gaga – one who isn’t avoid to take a massive leap in the fashion stakes. With a second look on our list, Rhianna truly shows just how iconic her style has been through the years. This white, barely-there look brought out Rhianna’s vibrant red hair and showed just how classy she is. Controversial, bold and a little confusing, this Nikki Minaj look is one for the books. The religious look created a mixture of responses but set her aside from the crowd and emphasised her fashion versatility. We all remember the memes that this dress created – Rhianna as a cupcake is the first one that comes to mind – and this look shook the internet, cementing its place as an iconic outfit. Everyone went nuts when Taylor Swift stepped out in this bright pink and orange set. The gorgeous silt skirt really popped and showed a different side of Taylor … pre-Reputation of course! 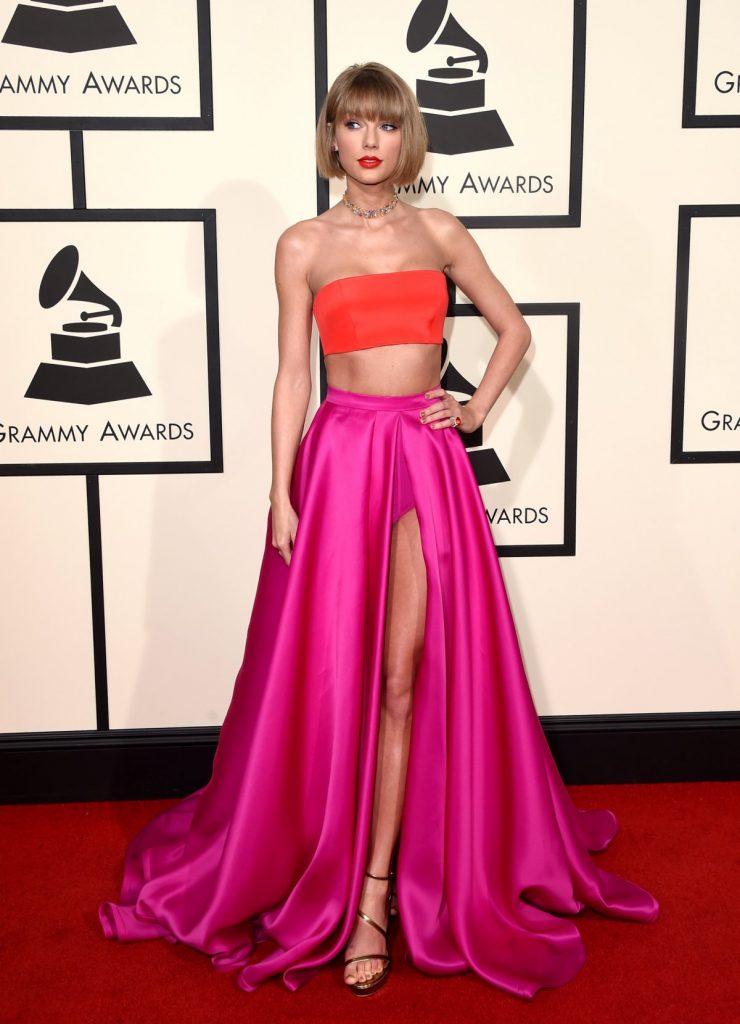 Paying tribute to the late David Bowie, Lady Gaga took this look to the next level. The electric blue really brought out the outrageous bright orange hair, showcasing Gaga’s style and remembering the iconic flair of Bowie. Third time’s the charm. The queen of controversy left little to the imagination with this barely-there rock star look, showing off her amazing figure and large new back tattoo. Lady Gaga, we salute you. All photography from Getty Images