The Queen and Anna Wintour Were BFFs at London Fashion Week

There were two Queens gracing the front row of London Fashion Week yesterday, and our Royal-loving hearts couldn’t handle it. 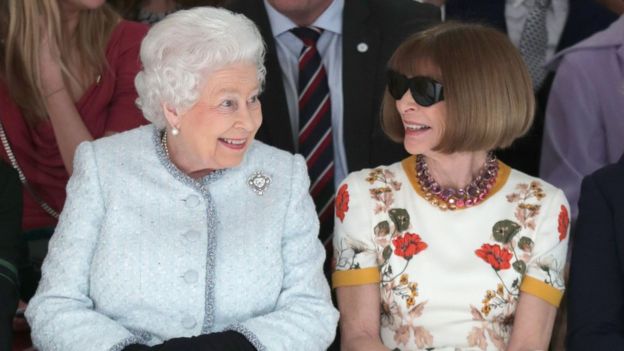 The Queen of England sat beside the Queen of Fashion, Vogue‘s Anna Wintour, at the former’s first ever fashion show appearance, chatting and laughing together at designer Richard Quinn‘s show. The Queen took to the stage to present the award, saying, “It is a great pleasure to be here at London Fashion Week today. From the tweed of the Hebrides to Nottingham lace, and of course Carnaby Street, our fashion industry has been renowned for outstanding craftsmanship for many years, and continues to produce world-class textiles and cutting edge, practical designs.”

Wearing a duck-egg blue dress while Anna donned her famous sunglasses, the Queen even had her own custom chair to sit on – a Philippe Starck Perspex ‘ghost’ chair with arm rests and a velvet cushion, estimated to be worth about £200.

While the Queen’s appearance was a surprise (and was kept under wraps in the lead up), we’re hoping this won’t be the last time she and Wintour rub elbows at Fashion Week.

Our Favourite Celebs Are Setting the Trend for 2018 Engagement Rings