It was the wedding we all wished we had gotten an invite to – Prince Harry finally married Meghan Markle, and despite the fact that there was plenty said about the choices on the day, it’s safe to say the two are living it up in marital bliss to worry about trivial criticisms.

While we got a complete look at the wedding, we weren’t privy to the exclusive reception that followed, with a trimmed down list of just 200 guests.

Of course, details have since been leaked, with even a few photos and videos making their way online. Here’s what we know (and missed out on):

It Was Hosted Inside A Glass Marquee

It Was Packed With Celebrities

Apparently, The Late Late Show host was a surprise host on the night and made sure to keep the momentum going, with guests partying on into the late hours/early morning. He Also Started A Dance Off

It may be hard to imagine, but apparently James started a royal dance off that included Harry, Prince William, and oddly enough, Prince Charles. A source told The Sun, “James ­Corden did his best to entertain and it went down an absolute treat.

“Everyone was laughing because it’s something no one expected. Meghan and her mum also joined in. Then everyone danced, which really kicked off the party.”

Charles packed up early, however, leaving with Camilla at 10:30pm.

Idris Elba Took Over The Decks

Amazing human being, Idris Elba, apparently got his chance to show off his musical inclinations, taking over DJ’ing duties from Sam Totolee (who played Harry’s favourite House tracks) and even dropped Whitney Housten’s “I Wanna Dance With Somebody.” We expected nothing less.

Guests Were Able To Slip Into Something More Comfortable

Actress Troian Bellisario, the wife of Suits actor Patrick J. Adams, shared some footage of the lush monogrammed slippers that guests were given to change into. Talk about comfy souvenirs. 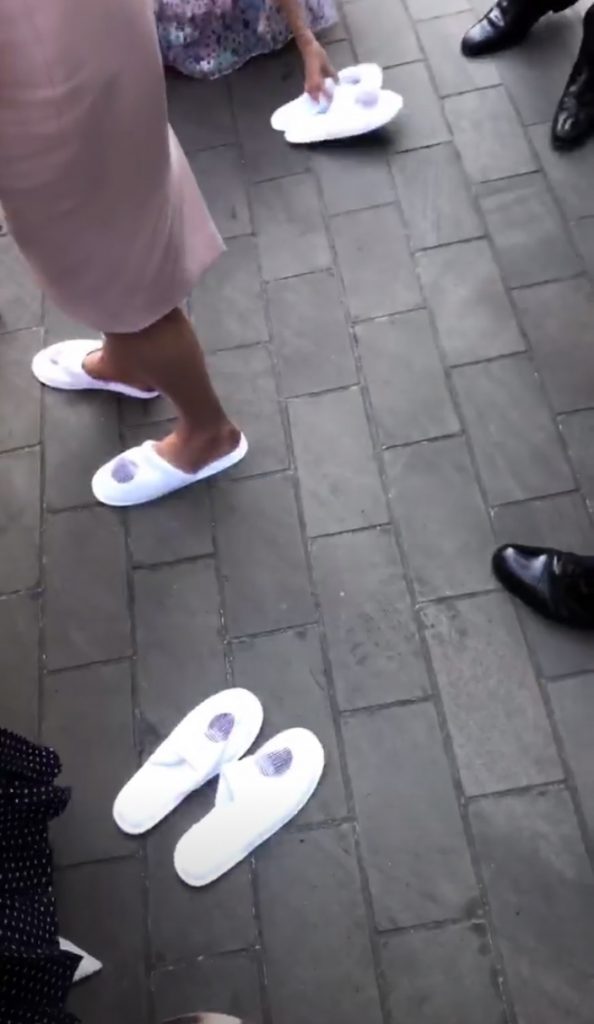 The leading man gave wife Amal a break to spin Kate Middleton and Meghan around the room. Can you imagine?

There Was Food and Drinks Galore

The catering was festival-themed with stalls and included burgers, pork belly, fairy floss, and a cocktail called ‘When Harry Met Meghan’ featuring rum and ginger (of course).

She’s not a winner for no reason. Apparently a game of beer pong was started and according to an insider, “Sere­na Williams played beer pong like it was tennis.”

Serena Williams, her husband and their bub taking a few snaps before the Royal Wedding! #weddedwonderland #royalwedding #serenawilliams

And not just between the couple. Fireworks were set off to signal the end of the night and remind the public that they were missing out on the fun.

There Was An ‘After After Party’

And George Clooney was leading the way. However, one report from The Sun says it took place at a bar in Marylebone while another says it was in a “soundproofed private home in Chelsea.”

Harry’s ‘Off-The-Cuff’ Speech Was A Hit

According to a source speaking to People, “He promised that all the Americans wouldn’t steal the swords and said, ‘Please, when you leave, be quiet as you don’t want to wake the neighbours,’ which was quite fun.” The older prince had a joint speech with Harry’s best friend, Charlie van Straubenzee, and according to a guest, it was a winner.

“William managed to strike just the right balance between hilarious and solemn. He did mention their late mother, Princess Diana, and said how proud she would have been of her younger son. “He said he was proud of Harry too and welcomed Meghan as the sister he never had and the best thing that had ever happened to Haz.

“But when he and Charlie got going, it was hilarious. They teased Harry about his growing bald patch and Wills said it would become as bad as his. It was some bash.”

Posted in Celebrity, Ever After, Royals, Weddings by wedded wonderland

Steal The Look: 17 Wedding Dresses To Make You Feel Like Meghan Markle