New York Fashion Week was struck with the unexpected Tuesday evening and it had little to do with Calvin Klein’s new Fall 2018 collection.

The runway was buried in under 50,000 gallons of popcorn. While we understand the need to exist outside the norm, the popcorn runway had its faults. Being crushed under the shoes of guests, small specks of popcorn dust blew through the air landing in the hair of celebrities, like Nicole Kidman.

What did Nicole Kidman ever do to deserve walking around NYFW looking as if she had an unfortunate case of dandruff!

With a post-apocalyptic theme, this runway was inspired by contemporary artist, Sterling Ruby. With weathered sides and skeletal barns hung with blood red mops, the runway was papered with spectral black and white Warhol reproductions.

Fixated on creating his own brand of “twisted Americana” and straying away from the brand that built blue jeans and minimalism, Raf Simons used his Calvin debut to take this collection to a new level. With all models wearing knit Fair Isle balaclavas and majority wearing big fighter gloves in silver foil, this runway set out to take a stand, highlighting the reductionist view of America’s most accessible myths.

With two-toned cowboy shirts, placket trousers, skinny striped sweaters, apron dresses with nothing underneath, and quilting squares pieced onto crisp white shirts, this created a very survivalist feel, particularly with Simon & Garfunkel’s “Sound of Silence” played in the background. 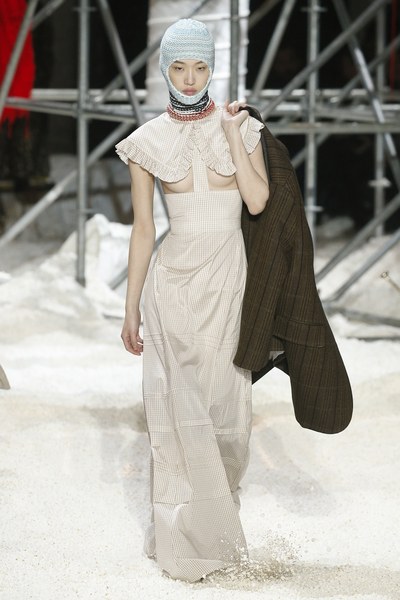 While we applaud Mr. Simons and his courage to defy the norm, we are missing the kind of fashion that suggest a different way of expressing who you are.

The message was clear and the runway unforgettable. But did anyone even pay attention to the collection? Isn’t that the most important part?