All the photos from Pink and Carey Hart’s wedding

Uber-rockstar Pink (aka Alecia Moore) and her husband former freestyle motocross Carey Hart have managed to navigate the fickle celebrity world brilliantly throughout their 10 years of marriage and to celebrate this super-cute couple, we’ve scoured the internet for all of the photos from their 2006 wedding.

The wedding was held on a beach in Costa Rica and the laid-back pair made sure their big day was relaxed and casual. Pink donned an unusual Monique Lhullier bustled skirt gown with a black sash and halter neck.

The pair first met in 2001 at the X Games in Pennsylvania and in 2005, Pink broke tradition by proposing to Carey while he was racing by holding up a board that said ‘Will You Marry Me?’  and then another board that said, ‘Serious!’.

Carey pulled over immediately, letting the other cars pass him and yelled out ‘yes’.

Since, then the paid have had an adorable daughter, Willow (who’s four) and have just announced they’re expecting another baby in 2017! 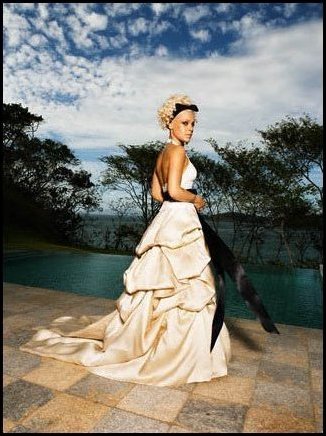