9 Albanian Wedding Traditions That’ll Have You Partying All Week

Weddings are celebratory and memorable days in any culture.

For Albanians, tradition has had a special place in weddings for centuries, and the Albanian couple’s wedding is a community affair and everyone’s involved!

Here are 9 Albanian Wedding Traditions to lookout for.

That’s right. This isn’t a one-day affair with the party ending at midnight. Nacional Albania tells us the traditional Albanian wedding starts seven days before the actual ceremony. Think guests singing and dancing along and a “party that involves the whole village.” The bride’s celebrations are usually held on Wednesday or Saturday, and the groom the day after. Alaturka Cultural and Travel Portal says the future bride receives a gold coin as a sign of the engagement. The bride will receive gifts and sweets from participating guests followed by a second celebration at the groom’s house where sugar-coated almonds are exchanged. The wedding gown, dowry and groom’s gifts are also shown at some point during the week! 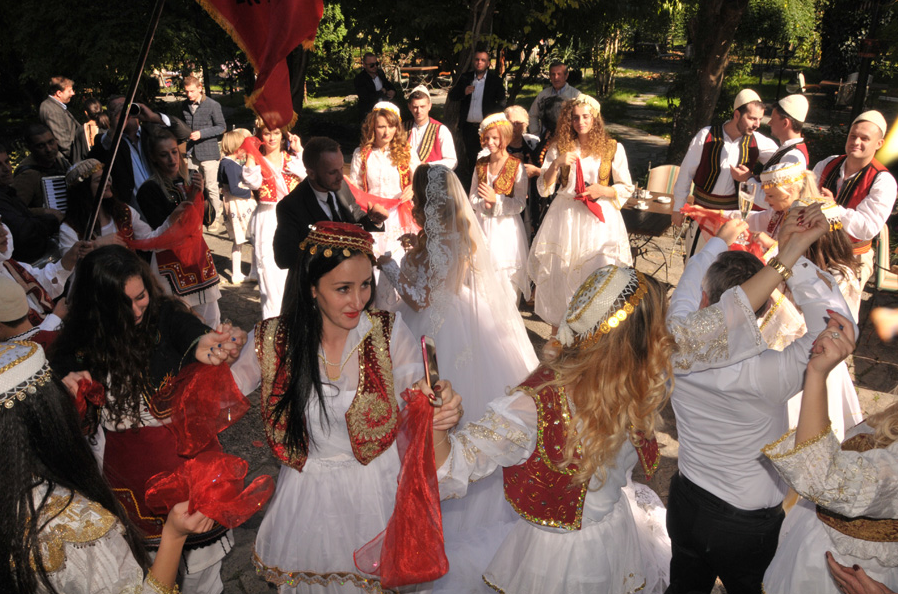 Weddings are an emotional rollercoaster and this is no exception at Albanian weddings. The bride leaving her family’s home en route to the new chapter in her life is a moving moment. Nacional Albania says that the bride and her family share tears of sadness (and joy) before meeting her groom.

The Flowers To The Bride

The youngest boy from the groom’s family carries a bouquet of flowers to give to the bride. The national flower of Albania is the poppy, which is becoming increasing popular as the bouquet of choice for a quirky homage to heritage.

Firing Guns For The Bride’s Arrival

Albanian Weddings fire shots when the bride arrives at the groom’s house. This is to signal the joy of the moment, and also because the wedding is seen as a kind of victory.

In Western weddings, we focus so much on the bridesmaids that we’re guilty of neglecting the groomsmen (krushqit)! That’s not the case in Albanian weddings though. Nacional Albania tells us that they accompany the groom to take the bride from her family’s home on the day of their wedding. The first groomsman is often the groom’s uncle followed by a party of over 10 people singing and dancing! Getting to the bride’s house means line-ups of decorated cars, the main car for the couple and the second holding the Albanian flag. It is Albanian tradition that the bride brings her dowry to the groom’s house. Nacional Albania tells us the dowry does not include money, instead it contains presents to all the groom’s relatives, various embroidery, pillows, blankets, carpets and furniture. This tradition does vary from region to region. Don’t worry though, it’s not all gifts to the groom and his family – he too sends the bride and her family gifts and money including gold jewellery, watches and clothes for all four seasons!

The groom’s mother stands at the door of the house waiting for the bride to give her honey and bread to eat. This Albanian wedding tradition is performed to wish the relationship be sweet as the honey. We think it’s meant to bee.

Placing Money Under The Bride’s Sandals

According to Nacional Albania, a little boy waits to take off the bride’s sandals when she enters her new home. After finding money that has been deliberately put under the sandals, the little boy will sit on the bride’s lap in hopes of having male children.

Traditional Dance And A Whole Lot Of Money

The wedding ceremony involves a traditional Albanian bride-groom dance and all the family and friends get involved. In modern lingo, the guests make it rain on the bride and groom by throwing bank notes on them. What’s the Albanian equivalent of Benjamins? We want them causing a flood at our wedding.