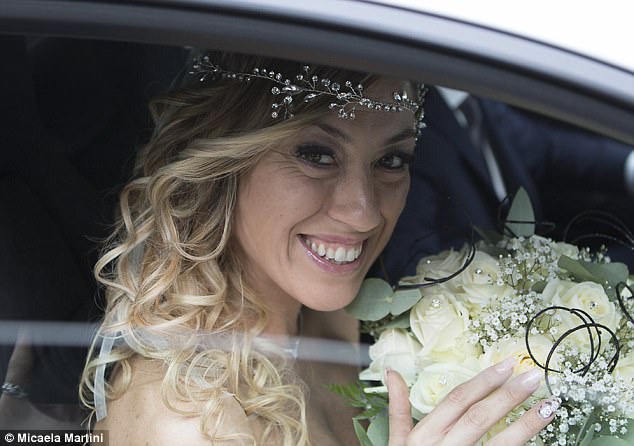 Proving the old adage that ‘you should love yourself first’ true, an Italian woman has married herself. Fed up waiting for the perfect partner to come along, Laura Mesi, 40, invited 70 of her nearest and dearest to the ceremony (which is not legally recognised, but hey, we can dream).

Mesi looked absolutely overjoyed on the day, beaming as she cut the cake (topped with a likeness of herself), walked down the aisle and danced the night away.

“I firmly believe that each of us must first of all love ourselves,” she told Italian newspaper La Repubblica. “You can have a fairy tale even without the prince.” Mesi continued to say that she first considered self-marriage after a 12-year-relationship with a partner ended when she was 38. At the time, she told friends that if she hadn’t found someone else by the age of 40, she’d marry herself.

“If one day I find a man with whom I can plan a future, I’ll be happy, but my happiness does not depend on him.”

Known as a ‘sologamy’, marrying oneself is an act of acceptance, joy, and the declaration that society can’t dictate your happiness according to those that have done it. Photographer Grace Gelder married herself back in 2014, and described the event as a homage to her personal development.

“I’d been essentially single for almost six years and built up this brilliant relationship with myself,” she told The Guardian. “Nevertheless, I was aware of getting into a rut, where a relationship with someone else seemed like too much hard work. So I really wanted to pay tribute to this adventurous period of self-discovery but, at the same time, look forward to a new phase.”

She also described how plenty of people called her actions narcissistic, explaining that she was comfortable with the idea that she loved herself. “My self-married status – meaningless though it may remain in the eyes of the law – has also given me this great sense of clarity,” she told The Guardian. “I seem to sense much more clearly than before if something is worth pursuing or best left alone.”

As reported in Newsweek, Brooklyn writer Ericka Anderson tied the knot with herself in 2016, explaining to ATTN that marrying a partner is a ‘cultural benchmark that is held above our heads as a symbol of success’.

She went on to explain that she married herself both as a political statement and for fun, telling The Telegraph, “I think it’s hard not to adopt whatever society’s messages are, and I certainly think that one of those messages is, ‘You are not enough if you are not with someone else.” Real Wedding: The Bride, the Groom and the Unicorn in the Room