HOW MANY IS TOO MANY? 9 WEDDINGS WITH THE MOST BRIDESMAIDS

Choosing how many bridesmaids to have is a dilemma that faces nearly every bride-to-be. It’s hard to choose who will take up the coveted role of a bridesmaid, especially when you’re caught between a huge group of girlfriends and relatives.

It was two years ago, wedding planning for my sister-in-law was well on its way. One problem – she has six sisters and three sisters-in-law! She was also set on having an equal number so she would have had to source another maid to ultimately make up 10 bridesmaids! While she ended up deciding on six, we wish we had known of these weddings below because it would have made 10 bridesmaid seem easy!

Nicole Polizzi, better known as ‘Snooki’ may have cleaned up her look but we still expected her wedding to be OTT!. We’re just glad, it wasn’t Jersey Shore themed. Snooki married Jionni LaValle in a lavish great-gatsby themed ceremony in New Jersey accompanied by her striking bridal party of 15 bridesmaids dressed in classic black. Amy Ewing, 26, and Alex Simmonds, 32 married in the Rudding Park Hotel in North Yorkshire with 130 bridesmaids and more than 100 ushers! The radio presenter and law student globally sourced friends to help them break the world record including well-known English Rugby league twins, Tom and George Burgess. We’re guessing the theme was go ‘big’ or go home! Sri-Lankan couple Nisansala and Nalin tied the knot with 126 bridesmaids, 25 groomsmen, 20 page boys and 23 flower girls! The couple married in the country’s capital, Colombo with the bride dressed by her sister-in-law, Champi Siriwardana in the presence of the who’s who of Sri Lanka. Who wouldn’t want to be part of this bridal party? Just look at those gorgeous saris! Jayne Blakeway, 50 and Shaun Lawrence, 53 have proved that marriage has no age and bridesmaids have no number! The couple wed at St Paul’s Church in Blackheath, West Midlands accompanied by 44 colourful bridesmaids made up by friends, nieces, great-great nieces, a 10 month-old baby and 71 year old pensioner! The wedding also featured 12 page boys and seven ushers. “They all mean so much to me, I thought why not have them all?” she said. 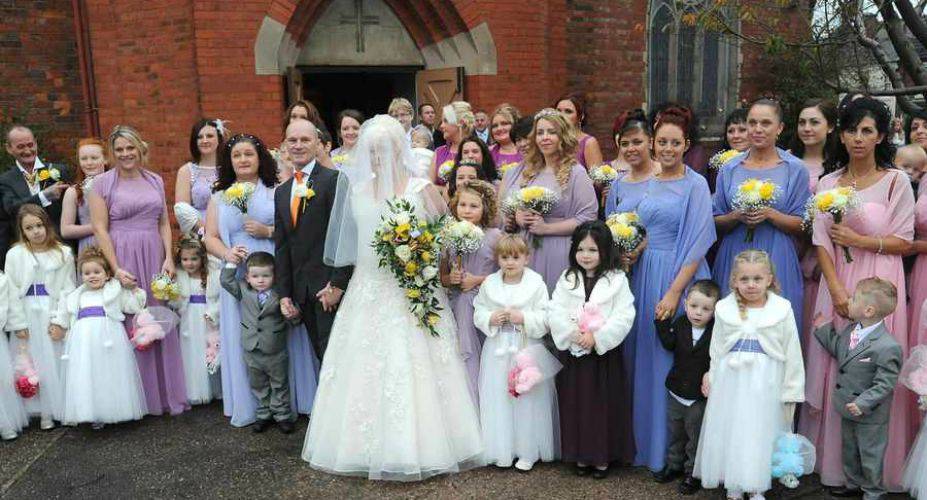 When dance teacher Katie Dalby was planning her dream wedding to fireman Norman Gooch (we’re jealous!) she couldn’t say ‘I do’ without her dance students by her side… all 74 of them. Originally having just six bridesmaids, the addition of 74 made it 80! It was 2003 when Suresh Joachim Arulanantham tied the knot with Christa Rasanayagam at Christ the King Catholic Church in Mississauga, Canada. Christa had an impressive 79 bridesmaids ranging from 18 months to 83 years old, while the groom had 47 groomsmen (still a lot if you ask us!).  Apparently Christa didn’t want to stop at 79 but had to when she ran out of saris! Businesswoman, Keyoon Chokelamlert married Kriangkrai Kittithanesuan at a luxurious hotel in Bangkok, Thailand.  The large number of bridesmaids paired with their massive smiles made this wedding look like royalty. This wedding currently holds the 2015 Guinness World Record title for the most bridesmaids with a whopping 168 ladies! Texas native, Tina Ackles had a vision for her wedding day that included girls from all over the states, ranging from 18 to 80 years of age, proving that everything is bigger in Texas! 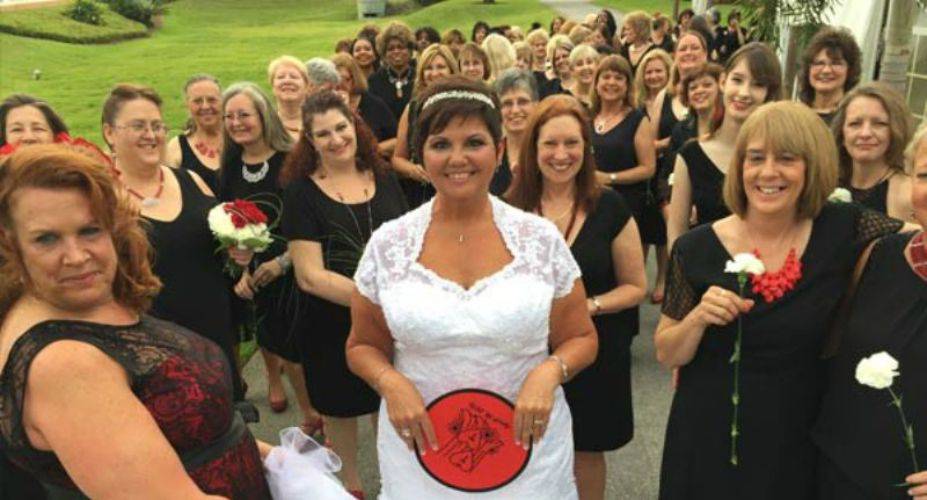 Although Frank Fearon and Patricia Andrews didn’t have 100+ bridesmaids like the others, it was still enough to make the bridge they were standing on collapse! This unfortunate fall went viral on YouTube with the whole bridal party plunging into the water with a lucky escape from the bride and groom. We couldn’t even imagine what would happen if they were bride standing in the middle…