9 Of The Most Expensive Weddings Of All Time

Worried about the cost of your wedding? We conducted a survey earlier this year to find out the average cost of an Australian wedding and while it had people talking, it’s nothing compared to this list.

Of course, celebrities, royals, and the just plain rich exist in an entirely different world to us mere mortals, so we really shouldn’t be too shocked by how much they’ve spent on their weddings.

Prepare yourselves, it’s a wild ride.

It’s hard to believe that Brad and Jen – the late 90s/early 00s power couple – got married 18 years ago. It’s even crazier to think that the couple dropped a massive $1 million on their July 2000 wedding – a number which was usually reserved for royalty (the monarch kind, not the Hollywood kind). If you’re wondering what would rack up such costs at the turn of the century: they spent $100,000 on security, chose a multi-million-dollar Malibu estate as their venue, spent $75,000 on a ‘zen garden’ featuring over 50,000 flowers, and $20,000 on fireworks, just to list a few. Meanwhile, Jen wore a Lawrence Steele gown while Brad chose a Hedi Slimane-designed suit (and Prada for his groomsmen). 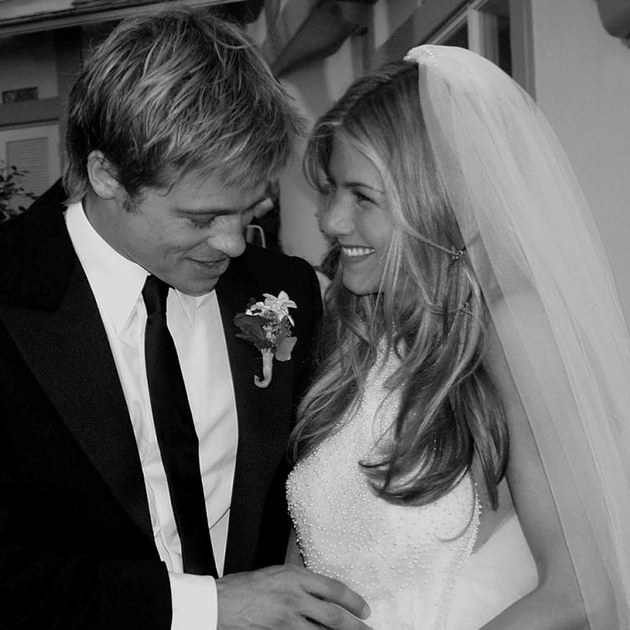 Elizabeth Taylor married her seventh husband*, Larry Fortensky, back in 1991, so you can imagine how much of a big deal it was that the couple splashed $1.5 million on their wedding day. The pair got married on Michael Jackon’s huge Californian estate, and as he was one of Taylor’s best friends, we doubt they were paying (much) for the venue. However, we assume the 100 security guards (including a former Israeli army officer) would have blown most of the budget.

Elizabeth at her final wedding, to Larry Fortensky. The most anticipated wedding of the year was hosted by Michael Jackson at Neverland Ranch. The security included a former Israeli army officer and a team of 100 security enforcers; despite the high level of security, helicopters hovered above the ceremony hoping to get exclusive photos and one paparazzo even parachuted into the ceremony. Elizabeth wore a pale yellow gown given to her by Valentino. Larry's best man was Elizabeth's hair dresser Jose Eber and Elizabeth's maid of honor was Norma Heyman. The ceremony was nondenominational as Elizabeth was Jewish and Larry was Protestant. At the after party, the bride and groom toasted with mineral water (they met each other at rehab, after all). Despite their infamous age difference, Elizabeth and Larry got along well even after their divorce. Larry never said a bad thing about her and refused many offers from tabloids. In one rare interview he did after her death in 2011, he spoke lovingly of her (basically blaming her intense fame and his discomfort with living with such crazy opulence and fame as their main problem), saying, “I have wonderful memories of my time with Elizabeth and I will treasure her memory forever." Elizabeth was generous with Larry especially because he so appreciated it and was so unpretentious he didn't demand anything from her. One gift she gave him was very sentimental to her—a pendant Richard had given her, which was part of a set she kept. They remained on good terms until her death. Photo by Herb Ritts. #elizabethtaylor #larryfortensky #michaeljackson #oldhollywood #90s #1990s #wedding #icon #legend #herbritts

When Christina Aquilera married Jordan Bratman back in 2005, it was a Winter Wonderland over that set them back over $2 million. The singer paid wedding planner Michael Gapinskihe plenty of money to fill their Napa Valley wedding with a range of expensive trees (including branches to create chandeliers), centrepieces made from exotic flowers, and plenty of crystals and white roses. Remember when Tom Cruise jumped on Oprah’s couch to declare how happy he was to be in love with Katie Holmes? While the love didn’t last, they’ll always have the memory of the $3.5 million dollars that they spent (wasted?) on the wedding in 2006. The pair got married in an Italian castle and even had Andrea Bocelli perform. Katie wore two Giorgio Armani gowns (he was even in attendance), with her second gown covered in Swarovski crystals that took 350 hours to assemble. Choosing to get married in Venice, George and Amal decided to foot the bill for all of their guests. This meant a bulk of the budget went towards housing their guests in the lush Hotel Cipriani. The reception took place at The Aman, which is just as pricey and was the perfect setting for their star-studded guest list. Really, no one’s entirely sure how much Kimye paid for their lavish wedding, but it’s definitely between 12 and 20 million (what’s a few million here or there, right?). The event had to be larger than life, mostly due to the nature of the couple, but also because Kanye had basically been in love with Kim for a solid decade before finally winning her heart. The weekend affair took place in Italy and France, where they spent $400,000 on the venue, $500,000 on Kim’s Givenchy dress, flew their wedding guests over and covered the costs for accommodation (and you can be sure it wasn’t a three-star hotel), and a marble table with their guests names engraved on it, which apparently cost almost $500,000. Lush. Wills and Kate’s 2011 wedding cost so much it’s kind of making our eyes water. Kate wore an Alexander McQueen dress reportedly worth $434,000 while the royal flowers cost around $800,000. Though to be fair, the couple asked that instead of wedding gifts, the guests were to donate to charities of the couple’s choice, and the entire affair brought an estimated $2 billion worth of revenue to the economy. If your eyes were watering after Wills and Kate, you should be shedding a river a tears at the price tag of Charles and Diana’s extravagant wedding in 1981. With a giant dress that was possibly the world’s best kept secret in the lead up and and insane 27 cakes, Business Insider estimates that the wedding would actually be worth $110 million if it is adjusted for inflation. We were all waiting for this. If you immediately went to clutch your tiara (and then realised you don’t own a tiara) once you heard that Harry and Meghan’s wedding cost a massive $56 million, you’re not alone. The wedding extravaganza had its fair share of criticisms when it came to how much each aspect cost, however the majority of expenses actually went towards security.