Feeling wanderlust? Having the aching to head off on the next great adventure? We’ve noticed and we’re here to help get you off the Pinterest board and on your way to the travel agent. According to Airbnb these are top trending holiday destinations you’ve been pinning like crazy.

If you have a thirst for feats of architectural marvels and a love for Catalan cuisine then Barcelona is a must. Bustling with culture and history there is an abundance of things to do. We must insist you go see the La Sagrada Familia – Gaudi’s Gothic church still under construction since 1882, then have a stroll into Museu Picasso and finish off your adventure at one of Barcelona’s delicious tapas bars.

One the largest connected ski areas in the world; Courchevel is the top destination for any snow lover. Made up of four villages, it’s most famous for it’s exclusive Courchevel 1850 which attracts the most select VIP’s – think Prince William and Kate Middleton, The Beckhams, the Saudi Royal Family, George Clooney, the King of Morocco. With a terrain to suit any ski enthusiast (whilst rubbing elbows with the rich and famous) we totally understand why Courchevel is one of the top trending destinations. 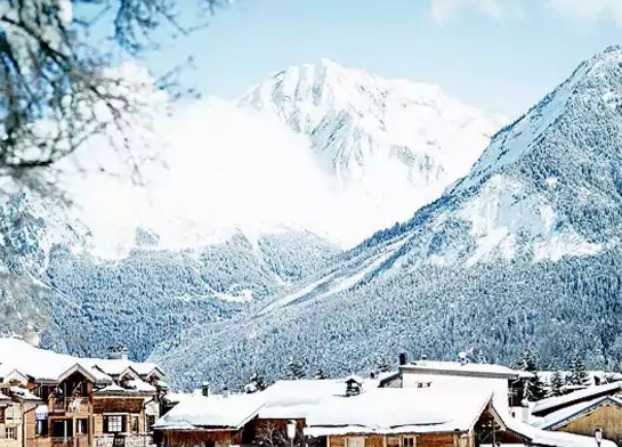 Image via The Telegraph

‘Concrete jungle where dreams are made of…there’s nothing you can’t do’. Yep the Empire New York City is definitely up there as a top trending destination. Whether it’s shopping at the most exclusive department stores, enjoying a romantic moment on the top of the Empire State Building (a la Sleepless in Seattle), seeing the glittering lights of Time Square or taking a ferry ride to see Lady of Liberty, NY has so much on offer. You know you want to…xo xo Gossip Girl.

There’s nothing more picturesque or luxurious than Santorini. The deep blue of the Aegean Sea juxtaposed by the white walls of its architecture, we completely understand why it’s a top trending destination. Why not enjoy a beach side stroll at Perissa beach the world’s most famous black beach, and then lazily lay by a resort pool and finish by taking in the most spectacular sunsets you’ve ever seen.

Don’t be fooled by its quaint multi-coloured rooftops the capital of Iceland Reykjavik is a cultural hub of hip music and arts. Not to mention Reykjavik is famously known for its wild nightlife. If leaving house at midnight for a night out is your scene than Reykjavik is the place for you. You’ll also want to spend some time exploring the old harbour town and it’s eccentric nooks.

Featuring some of the most outstanding crystal clear waters and underwater scenery, it’s understandable why Sharm El Sheikh is a top trending destination. On the cusp of the Red Sea whose warm waters provides a home for colourful coral, it’s the perfect destination to indulge in snorkeling and scuba diving. You’ll forget you’re so close to the depths of the African desert!

Away from the mad bustle of the world Kyoto in Japan will have you feeling like you’ve stepped into a new world. The famous bamboo groves are magical to behold and the Gion district has the entertainment and geisha quarters. The teahouses will have you longing for a time ago and the shines will have you calm and collected.

The backdrop of James Bond’s ancestral home in Skyfall and a countless number of scenes from Harry Potter – if you’re a lover of stark misty beauty than the Scottish Highlands is right up your alley. With a countless number of cozy countryside cottages littered along the highland, you can snuggle up and enjoy the beauty of rugged mountain ranges and cool northern breeze.

One of the most luxurious destinations in the world we’re not surprised that Bora Bora is a top trending destination. With some of the most beautiful waters and coral reefs, Bora Bora has uninterrupted ocean views and gorgeous lush mountains. Bora Bora will have you relaxing and then throw you into action-packed fun – hiking, stingray snorkeling, jet ski tours – you name it.

Tenerife will have you swimming and sunbathing all year round. And the fun doesn’t stop there! Tropical forest walks, countless number of beaches to choose from, streets of designer shopping, museums for everyone, temples, modern art and old colonial towns. And if you’re visiting during February to March you must see the Carnival of Santa Cruz de Tenerife – a mad celebration that is second only to Rio.

5 Things to Consider When Planning Your Bridal Registry