Here’s What Your Birthstone Means For You

The 12 birthstones may be gorgeous, but do you know what they actually mean?

Birthstones can be traced back to the Old Testament, where it was said that 12 gems adorned the breastplate of Aaron. These gemstones stood for the 12 tribes of Israel and they were a little different to the stones that we know today. They were: emerald, sapphire, diamond, topaz, carbuncle, sardius, agate, ligure, amethyst, onyx, jasper, and beryl.

Skip ahead to the 1st and 5th centuries, where Flavius Josephus and St. Jerome – both scholars – paired the gems with the zodiac, with an idea that the person wearing the gemstones would switch between them for each corresponding month.

It wasn’t until 18th century Poland that the practice of selling gemstones based on a person’s month of birth became the norm, and then in 1912, the US National Association of Jewellers marketed the stones this way.

Today, the gems all have their set place on the calendar, each holding significant meaning to their matching month.

While garnets can come in a range of colours, the January birthstone ranges from deep red to a more brownish red. Garnets are said to protect their wearer during travel, as well as preventing nightmares. They have the ability to restore energy and heal the mind, body and spirit.

The garnet stands for truth and faithfulness and can be used to harness your creativity and tap into your higher thinking. As amethysts are generally purple, its no surprise that at one point in time they were available exclusively for royals. Amethysts are said to bring good luck, sharpen your intelligence (according to Leonardo da Vinci), and give the wearer courage during dangerous and hard times.

Amethysts are known to promote peace and balance, heighten your emotional intelligence, and open your eyes to help you make better decisions. Aquamarine gems possess a beautiful pale blue colour and are said to be the favourite of mermaids (aqua of course means water, and marina means sea in Latin). In older times, aquamarine was said to protect sailors as they navigated the oceans and their link to water means they provide a calming influence on the wearer,

Aquamarine promotes spiritual awareness, enlightenment, and emotional wisdom. It was also once said to have healing properties when soaked in water.

This aquamarine and diamond ring stack is perfection ??

The most popular of the birthstones; the diamond’s strength also extends to its meaning, where it is said to bring longevity, clarity and balance to relationships. Diamonds are also said to bring the wearer peace and safety from negative energies.

They represent strength and devotion, which is why they are most commonly used for engagement and wedding rings.

Known for its vibrant green hue, emeralds are said to symbolise compassion, patience, and universal love, with even the Romans of ancient times dedicating the gem to Venus, the goddess of love and beauty.

Emeralds are also regarded as a health stone, able to help the immune system battle sickness, improve memory,  promote spiritual, mental, and physical balance, and encourage you to lead a more harmonious life.

A whole lot of emerald bling to make your Monday sparkle ✨

Pearls range from white to black and are found in both freshwater and saltwater mollusks. They often stand for wisdom and the lessons you learn throughout your life. They are said to provide the wearer with protective energies for all aspects of life and have a calming effect, allowing you to understand and feel self-love.

Pearls represent purity and stable marriages, while in Greek mythology, pearls were said to protect brides from sadness.

For those with a love of the serenity of the ocean, our award winning Pearl, Ruby and Diamond Grace ring is the ideal choice.

Rubies are known to be a vibrant red, though some can even be a pale rose colour. They are known as a sign of power and wealth and can bringing the wearer the latter in both emotional and financial forms.

Rubies were significant in the Medieval period and were used on battle armour as they were said to help protect against danger. They also symbolise love, passion and success.

We adore the intricate details of our Ruby and Diamond Imperatrice Ring. Do you know someone who would love this gorgeous handmade ring?

Peridots are light green gems that are sometimes called the Evening Emerald. They are said to help cure depression and can protect from nightmares if set in gold.

Peridots can encourage a positive attitude about oneself, as well as wealth and vitality of spirit and an emotional and mental strength that allows you to rid yourself of anxiety. 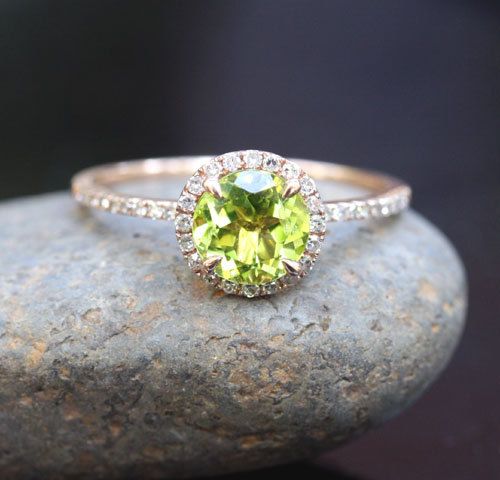 Sapphire can come in a range of colours, though they are most often blue. They are used for protection physically, emotionally, spiritually, and mentally.

Sapphires stand for love and loyalty and can help get rid of envy. They encourage peace, bring out your leadership skills, and also improve memory.

The most incredible blue sapphire you will ever see ? This beauty was customer made for a very lucky lady!

Opals are known for their translucence and the spectrum of colours they produce when under the light. They are used to calm people, repel evil, and protect eyesight, as well as help the wearer with greater self-confidence. Topaz are actually colourless but their impurities turn them into colourful stones, often amber. They are associated with healing, energy, peace, and abundance.

Topaz crystals are said to help you better understand complex issues, increase your attention span, and help you achieve success. They are also known as the “gem of life.” Known as a love charm, turquoise comes in a range of blue shades. They are said to bring the wearer good fortune and protection from evil, thanks to its nature as a purification stone.

The turquoise gem can help to heal your emotional wounds and encourage self-awareness and problem-solving. They also promote happiness, can help alleviate physical pains like cramps, and bring good energies around finance and health. Posted in Astrology, Ever After, Jewellery by wedded wonderland