They say time flies when you’re having fun and we have sure enjoyed watching the blossoming romance of George and Amal Clooney celbrated their third Wedding Anniversary on Wednesday. In honour of their relationship, we’d like to take you down a trip of memory lane to revisit the glamorous red carpet events, international summits, and, not to mention, the birth of their gorgeous twin girls Ella and Alexander. 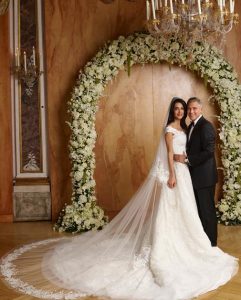 In April 2014, it was announced George had proposed to his then-girlfriend Amal and in the same year the two wed. Amal’s wedding dress was custom designed by Oscar de la Renta himself, not long before he passed away. The lace off-the-should gown was a beauty to behold. The wedding was held in Venice at the Ca’Farsetti and several celebrities were on the on the guest list. Before the ceremony, the two treated their guests with a weekend of water taxi rides and glamorous parties. They sure dressed for the occasion! 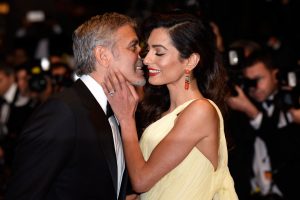 Away from the Hollywood glamour and constant red carpets, the two have been consistent agents of change. Amal who works as a Humanitarian lawyer just last year had the honour of speaking at the U.N. General Assembly with her client Nadia Murad, a Yazidi woman who escaped ISIS and is now a Goodwill Ambassador. 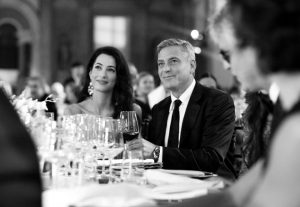 Earlier this year the two announced that Amal was pregnant – with twins no less! The baby girls were born in June 2017 and doting parents have made sure that the lens of prodding cameras have stayed clear of their daughters. Here’s hoping the Clooneys continue their good work, and enjoy their lives as parents of twins.

Image Credits: All images via Style.com and Harper’s Bazaar

Kim Kardashian Reveals When she fell for Kanye