This is the moment one groom-to-be turned he and his girlfriend’s mutual love of ’90s sitcom Friends into hands down one of the most romantic gestures we’ve ever seen.

The two superfans got engaged at Comedy Central UK’s FriendsFest at an outdoor event with a fully recreated set of Monica and Rachel’s apartment, Central Perk, plus a partial set of Joey and Chandler’s apartment – oversized TV cabinet and a canoe in tow! For those of you who can remember, (can you believe it has been 17 years?!) Chandler and Monica got engaged in season six finale. Chandler’s original proposal was thwarted by the sudden reappearance of her ex Richard, so Monica sets up a surprise proposal covering their apartment with dozens of flickering candles, before asking Chandler to marry her. 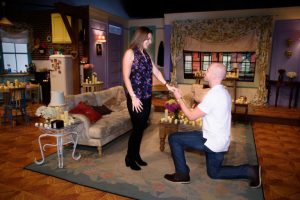 “We both absolutely love Friends, and we came to the very first FriendsFest within our first month of dating”, explains Adam. “When I saw that FriendsFest was back for a third year, I knew that it would be the perfect place to propose to Claire as the event means so much to us both”.

“FriendsFest was one of our first memories together, so it was so special when I walked through the door to Monica’s apartment to see it had been filled with candles”, said Claire.

“When Adam appeared from around the corner, went down on one knee, and proposed, I couldn’t believe he had done all this for me. It was such a magical moment, one that we will remember forever!”

Six Women turn up to Wedding Wearing the same Dress