The infamous couple from Channel 7’s The Seven Year Switch, Brad and Tallena decided to get matching tattoos on their honeymoon (you might remember that Tallena also got a matching tattoo with her ‘TV spouse’ Tim which caused some serious controversy during the series).

This would all be a ‘non-story’, but it seems the internet has gone into meltdown over the ink, but we’ll let you be the judge… 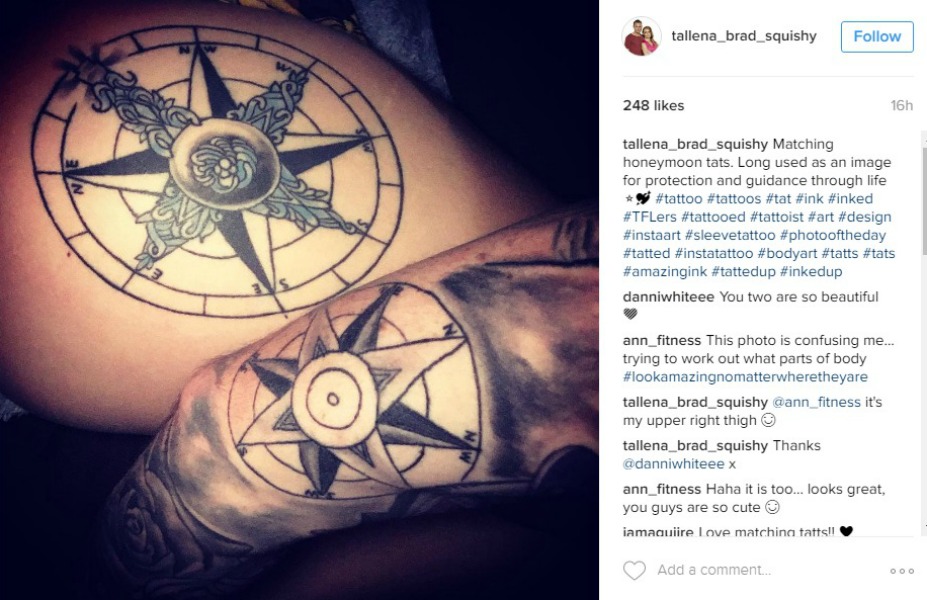 Firstly, let’s clear up exactly WHERE the tattoos are on this hot couple’s body. Brad’s is quite obviously on his arm, but after clarification, we found out that Tallena’s work of ‘art’ takes up her right butt cheek!

Secondly, many eagle-eyed fans have spotted that the compass looms back-the-front.

“Has the photo been reversed or something? The points of the compass read north, south, east and west, with north being at 12 o’clock, east at 3, south at 6 and west at 9….” – kathnut

Another user commented saying, “These suck, the lines aren’t even straight! Hopefully you got them somewhere that you can hide them well.”

Whether you love or hate the tattoos, let’s let the happy couple celebrate their new life tof ether in peace… #Ammiright!?

KATIE HOLMES HAS BEEN SECRETLY DATING THIS HOLLYWOOD A-LISTER FOR 3 YEARS!

IGGY AZALEA CALLS OFF THE WEDDING AND DUMPS FIANCÉ NICK YOUNG FOR THE SADDEST REASON!