It’s been over 30 years since Lady Diana Spencer (forever in our hearts as Princess Diana) married Prince Charles and we’re still talking about that iconic dress of hers.

If you weren’t around to watch the spectacle, you’ve surely seen it since. The 25-foot-long train, the copious amounts of taffeta, the unbelievable intricacy of its embroidery and 10,000 pearls – the gown, created by husband and wife David and Elizabeth Emanuel, is a work of art, one that has been displayed in museums since.

A lot of work went into creating the dress – and keeping it hidden from the public before the day – but not everything went to plan. These are 9 things you may not have known about the People’s Princess’ iconic dress. Following the wedding, The Press Courier reported that the dress was “the most closely guarded secret in fashion history.” The details of the dress were kept so successfully hidden from the media that details were only released “in sealed envelopes” and could only be opened “the moment [Diana] stepped into the glass coach at Clarence House.”

On top of this, the designers had to make three dresses for Diana, just in case word let out about her dress. Luckily though, nothing was revealed – something which seems almost impossible these days. She Had Some Extra Luck Within Her Dress

On top of the aforementioned tradition, Diana’s dress also had an 18-carat gold horseshoe that was studded with white diamonds sewn into the embroidery.

Her Heels Took Half A Year To Make

Due to her height, the heels that Diana wore had to be low, as cobbler Clive Shilton explained. “Her main concern was that she wouldn’t appear taller than Prince Charles, and because she was very tall — 5ft 10in — the shoes would have to have a low heel.”

The silk slippers were covered in 542 sequins and 132 pearls and had a “C” and “D” with a love heart in between painted on the shoes’ arch. 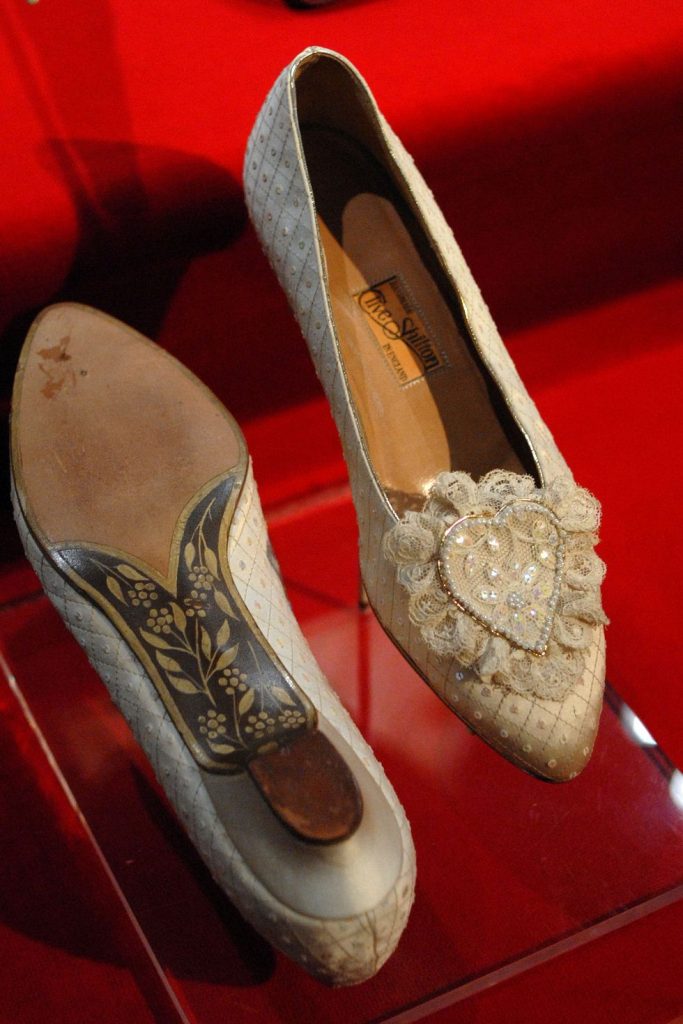 She Had To Be Sewn Into Her Dress

Diana revealed in a later interview that she suffered from bulimia, which caused her to drop several dress sizes in the lead up to her wedding. “The first time I was measured for my wedding dress, I was 29 inches around the waist. The day I got married, I was 23½ inches. I had shrunk into nothing from February to July. I had shrunk to nothing.”

As a result, she had to be sewn into the dress by her team.

The Dress Was Compromised

Maybe not so dramatic, but Diana’s makeup artist on the day – Barbara Daly – revealed in the book Diana: The Portrait that Diana had actually spilled some perfume on the front of the dress. Barbara assured her that it would go unnoticed, saying, “there’s so much fabric it will evaporate.”

Diana’s massive gown, with all its taffeta and 25-foot (over 7 metres) train, barely fit within the glass coach that waited for her, along with her father. Elizabeth Emanuel, one of the dressmakers, told The Daily Mail that the dress had to be folded “like a bed sheet” by the royal bridesmaids in order to fit inside. It was something they’d “spent hours practising.” Unfortunately the gown was badly creased and had to be smoothed out. The Veil Was Unbelievably Long

Diana’s veil was made of 140 metres of tulle. Her youngest bridesmaids, India Hicks and Sarah Armstrong-Jones, had the job of looking after it on the day, and practised in the lead up to the wedding to ensure that the train – which measured out longer than the 25-foot train – was always perfect. India said in Diana: The Portrait, “Sarah and I were given a lot of practice with a big long sheet … It was measured out and tied around Diana … so Sarah and I could practice how to get it in and out of the carriage, because I think the train was something like like 25 feet, which was the longest ever.”

A Matching Parasol Was Made In Case Of Rain

Due to England’s rather grey weather, two antique silk parasols were created by Elizabeth Emanuel, who purchased them from Phillips auction house and covered both in ivory and white fabric, used lace from the dress to create a trim on each, and embroidered pearls and sequins onto them. The two colours were used “so no one would know which matched her dress,” Elizabeth told The Daily Mail.

Thankfully the day remained dry – a relief to Elizabeth, who said, “It was made of such light material that it certainly wasn’t waterproof — it wouldn’t have done her much good!”

How To: Support A Stressed-Out Bride

A Lavish Black And Gold Wedding At Curzon Hall