100 Years Of The Most Popular Wedding Dress Styles

Fashion is a reflection of history.

From the beaded, boxy dresses of the roaring twenties to the daring mini skirts of the swinging sixties; these clothes make a statement about their time. This applies to wedding dresses too.

We are taking a trip through the ages to look at some of the most popular wedding dress styles.

Some trends live on in the dresses of today, while others have stayed in the past where they belong (we are looking at you, the 80s). The 1910s were all about femininity and romance with long, flowing, empire-line gowns. Dresses needed to accommodate for movement as the wedding dance was popularised during this decade. Dresses featured trimmings such as lace and ruffles that were finished off with a brooch. They were called the Roaring Twenties for a reason; we’re talking jazz clubs, fast cars, and liberated women. Wedding dresses were made in beaded fabrics, sported dropped waistlines, and hemlines were – wait for it – above the ankle. This was pretty risqué for the times and was only worn by the most blasé of ladies. Dresses were boxy in shape as women relinquished wearing constrictive corsets and embraced the boyish look. Finally, no bride was wed without wearing a cloche hat or Juliet cap coupled with a floor-length veil. The imminent war and economic uncertainty meant that fashion retreated to its traditional roots in the 1930s. The popularisation of man-made fibres meant that clothes, including wedding dresses, were made out of fabrics like rayon. Dresses were modest, and hemlines returned to the floor. Most dresses had long silky trains which created a beautiful mermaid silhouette. The 1940s took the idea of outfit repeating to the extreme. Wedding dresses were considered a luxury for most brides as the western world was struggling to deal with the effects of the war. Dresses were handmade and worn more than once, often by sisters and friends. The style remained fairly unchanged from the previous decade, apart from the popularisation of V-necklines. 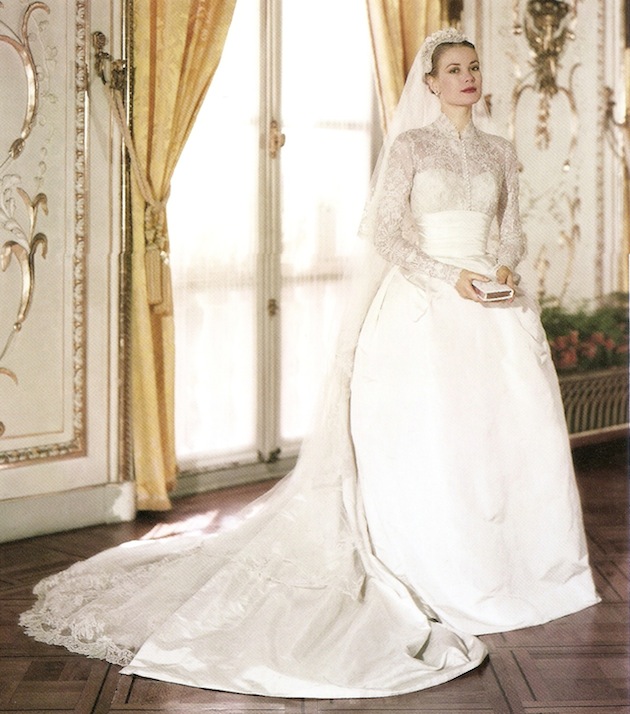 The 1950s was the era where some of the most revered wedding dresses – and the women who wore them – were born. Hollywood starlets had an enormous impact on fashion. The crimson lips and bedroom-eyes of Marilyn Monroe were copied by many brides and Grace Kelly set the standard for dresses. Ball gowns with teeny waists were the flavour of the month, or should we say, decade. 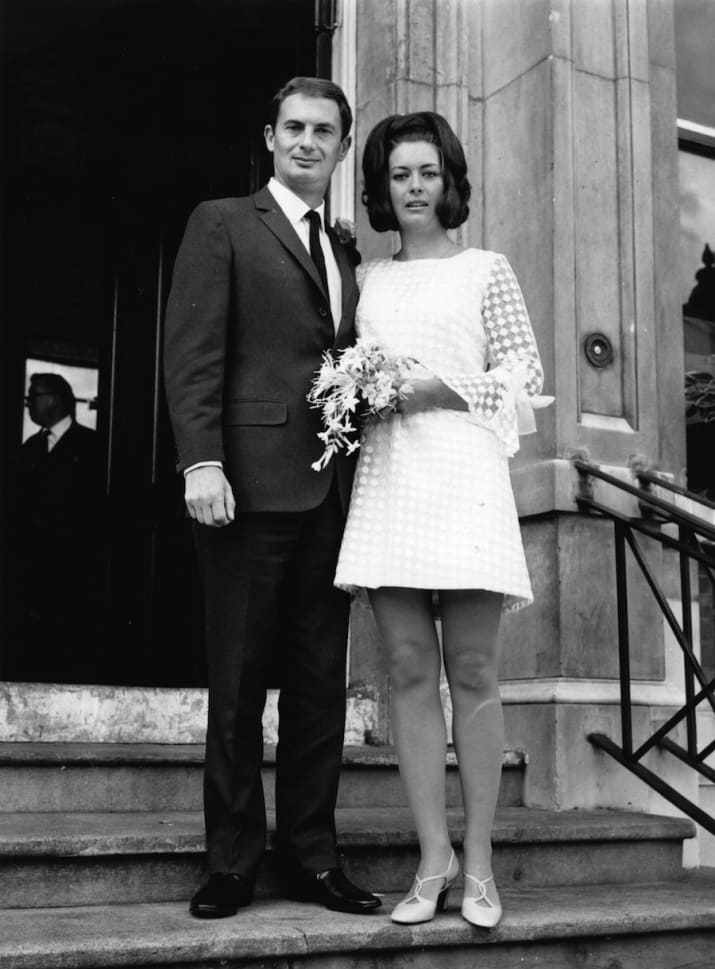 Bridal fashion literally scaled new heights in 1960s. The traditional wedding dress was reinvented to reflect modern times. Hemlines receded past the knee and necklines became higher. The height of the Space Age was explored through playful prints and textures, and brides even dabbled in colour. Audrey Hepburn notably wore a pink dress to her wedding to Andrea Dotti. This hippy haze of the 1970s brought on a wave of floaty fabrics and nostalgia for the past. Necklines remained high and sleeves became long. Wedding dresses featured billowing layers and bell sleeves which fit in seamlessly with the bohemian trend. A finishing touch for any 1970s bride was a wide-brim hat used as a veil. The above photo of Farrah Fawcett on her wedding day is the epitome of the fashion and feeling of the decade. Look at that glow! The 80s can be seen as an amalgamation of all the bridal trends over the past five decades. The typical dress was a bouffant princess-cut gown that featured layers of lace and tulle. Most importantly, it had shoulder pads you could land a plane on. And the only fabric of choice; taffeta. Far from the extravagant dresses of the past decade, the 1990s took a simpler approach to bridal fashion. The 1990s were all about sleek, crisp, white dresses. This is the era where the formfitting dresses we know and love today began to blossom. In 2016, Meghan Markle told Glamour that late Carolyn Bessette’s 1996 wedding to John F. Kennedy Jr. was “goals”. Could there have been a bit of 90s inspiration in her dress choice? Just maybe. The new millennium saw the rise of a completely new style of wedding dress: the strapless kind. This dress came in all shapes and forms – the princess-cut, mermaid, sheath – but were always strapless. Wedding dresses also became more relaxed as a popular choice for couples was to elope in a destination that didn’t require as formal attire. Brides also embraced tanned skin and flowing curls. And today? A wedding and your dress is an expression of your love and style, so whatever you enjoy is the rule. Whether it be a beading or taffeta, it’s your choice! If you’re still wanting some of the latest bridal trends, check out must-see looks from the Bridal Bazaar Runway. There is someone for everyone, no matter your decade of choice.

What These 10 Wedding Dress Colours Say About You